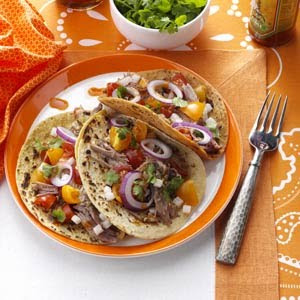 My husband shares my deep love of Mexican Food and Pork Carnitas are at the top of our list of favorites. How would we ever find another partner that would understand our affection for braised (and sometimes fried) pork?

Thanks to Taste of Home we now have the perfect recipe for Pork Carnitas to make at home. And there's a bonus - they are made in a Slow Cooker!

You have to be signed in to Taste of Home to see this recipe, but it's free to join.

The chicken broth, green chiles and salsa add the perfect amount of moisture to the meat. I left out the oil, made 1/2 the recipe and cooked my roast on low for 6 hours. It was perfect! I served the carnitas with homemade tortillas, beans, rice, avocado slices, cilantro & onions.

Click Here for the recipe. The photo is from the Taste of Home website.
Posted by susitravl at 12:20 PM 25 comments: 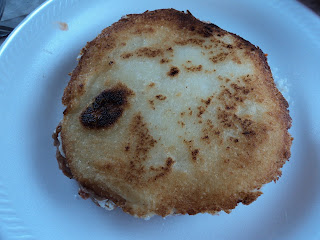 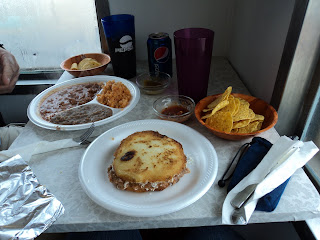 DELICIOUS sums up this experience in one word. We haven't been eating out much (boo to that, but yea for losing weight and saving money) and today was the day I couldn't take another home cooked, healthy meal. I wanted to eat some Mexican food - and it had to be a place where I would take one bite and swoon. I found that experience at Taco Nacho.

We had to laugh because they don't have nachos (thank goodness) or tacos - but they do have Mariachi's - not a band - but a corn tortilla on a plate with meat on top. Sounds to me like you could fold that over and have a taco, but they owner said they do not have tacos. They do have tamales - both Mexican & Venezuelan - with or without gravy.

My Arepa was absolutely one of the best things I have ever eaten. The "corn fritter" was crispy on the outside and creamy softness inside. It was filled with refried beans, shredded pork in a light gravy and cheese. The only thing that could have made it better, would have been cilantro and onions, which I asked for but didn't get.

The Loose Plate that Doug had was Pork in red chile (Rojo), beans and rice. Not too hot - mine was spicier, but still a fantastic combination of flavors. He's not a bean lover, and didn't finish these either, but he thought they were pretty good.

The specials board touted Empanadas, Albondigas, Pabellon and other varieties of Arepas, and fried Plantains, all of which I am anxious to try. Too bad these things aren't listed in my Weight Watchers points book, and they are only open 8:00 - 3:00 Monday - Saturday. BAD NEWS - TACO NACHO CLOSED 2/11/11. THEY HOPE TO RE-OPEN SOON IN A NEW LOCATION AND WITH A NEW NAME - STIVALY'S CAFE.
Posted by susitravl at 3:13 PM 11 comments:

Cilantro, chipotle in adobo sauce - two ingredients that immediately attract me to a recipe. So, when I saw the recipe for Southwestern Turkey with Spicy Gravy on Recipe Lion's website, I knew I had to try it. It was absolutely the most delicious and flavorful Thanksgiving turkey we had ever eaten.

You can find the Southwestern Turkey Recipe here.
Posted by susitravl at 1:54 PM 6 comments:

Aarrggghh - I need help!!! How do you wonderful bloggers take care of your home and family, have hobbies and maintain a beautiful blog complete with photos, recipes, giveaways, etc. There are just not enough hours in the day for me and I only sleep 5-6 hours at night.

We have been trying to save $$$ and the first thing we cut out was eating out. That was the ultimate sacrifice for me. While I love to cook, I love eating out more - no clean up, you know.

We did make it to La Hacienda on North Broadway in Wichita on Saturday afternoon. No photos - we had Foxy & Lucy with us and those dogs love tacos. We had to hurry and eat before they grabbed our food. Too cold to eat at the picnic table outside. Doug had tacos - barbacoa and al pastor. I had the Burrito al Pastor which was incredible.

One of these days, I'll get organized and learn how to blog like a pro and will have a million followers. I'm such a dreamer.
Posted by susitravl at 1:39 PM 3 comments: